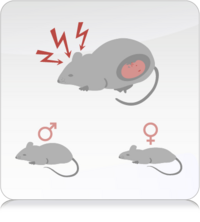 Eating disorders (EDs) are damaging mental and metabolic illnesses. Recent evidence suggests that epigenetic mechanisms may be involved in initiating and maintaining EDs. Schroeder et al. explored the effects of chronic variable stress during the whole period of gestation, response to food restriction, and susceptibility to develop activity based-anorexia, binge eating, and metabolic syndrome in male and female offspring. They report that chronic prenatal stress induces sexually dimorphic effects on placental function, affecting fetal hypothalamic programming and subsequent basal metabolism and the response to a variety of metabolic challenges.

Objective: Vulnerability to eating disorders (EDs) is broadly assumed to be associated with early life stress. However, a careful examination of the literature shows that susceptibility to EDs may depend on the type, severity and timing of the stressor and the sex of the individual. We aimed at exploring the link between chronic prenatal stress and predisposition to EDs and metabolic disease.

Results: Contrary to controls, prenatally stressed (PNS) female offspring showed resistance to ABA and BE and displayed a lower metabolic rate leading to hyperadiposity and obesity on HF diet. Male PNS offspring showed healthy responses to FR and ABA, increased propensity to binge and improved coping with HF compared to controls. We found that long-lasting abnormal responses to metabolic challenge are linked to fetal programming and adult hypothalamic dysregulation in PNS females, resulting from sexually dimorphic adaptations in placental methylation and gene expression.

Conclusions: Our results show that maternal stress may have variable and even opposing effects on ED risk, depending on the ED and the sex of the offspring.