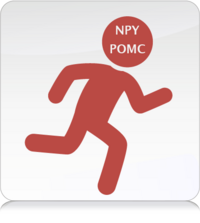 Exercise increases insulin sensitivity. Recent observations support a rapid and constitutive plasticity of melanocortin synaptic organization which responds and contributes to metabolic homeostasis, particularly for neuropeptide Y (NPY) and proopiomelanocortin (POMC) positive neurons. He and colleagues hypothesized that such changes could underlie the positive effects of exercise. They found multiple mechanisms in the remodeling of synaptic and cellular properties of NPY and POMC neurons of the arcuate nucleus in response to exercise.

Objective: Hypothalamic Pro-opiomelanocortin (POMC) and Neuropeptide Y/Agouti-Related Peptide (NPY/AgRP) neurons are critical nodes of a circuit within the brain that sense key metabolic cues as well as regulate metabolism. Importantly, these neurons retain an innate ability to rapidly reorganize synaptic inputs and electrophysiological properties in response to metabolic state. While the cellular properties of these neurons have been investigated in the context of obesity, much less is known about the effects of exercise training.

Results: Using whole-cell patch-clamp electrophysiology, we found exercise depolarized and increased firing rate of arcuate POMC neurons. The increased excitability of POMC neurons was concomitant with increased excitatory inputs to these neurons. In agreement with recent work suggesting leptin plays an important role in the synaptic (re)organization of POMC neurons, POMC neurons which express leptin receptors were more sensitive to exercise-induced changes in biophysical properties. Opposite to effects observed in POMC neurons, NPY neurons were shunted toward inhibition following exercise.

Conclusions: Together, these data support a rapid reorganization of synaptic inputs and biophysical properties in response to exercise, which may facilitate adaptations to altered energy balance and glucose metabolism.