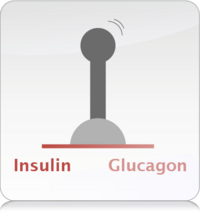 GPR142 is a G protein coupled receptor that is almost exclusively expressed in the islets of the pancreas. Our knowledge about its physiological role and pharmacological potential is very limited. Rudenko and colleagues discovered that GPR142 efficiently stimulates pancreatic glucagon secretion and found that the effect of GPR142 agonism on glucose disposal is a balance between insulin-mediated glucose uptake in fat and muscle and glucagon-mediated glucose production in the liver. Surprisingly, GPR142 agonism also increased energy expenditure and improved insulin sensitivity.

Objectives: GPR142, which is highly expressed in pancreatic islets, has recently been deorphanized as a receptor for aromatic amino acids; however, its physiological role and pharmacological potential is unclear.

Methods and results: We find that GPR142 is expressed not only in β- but also in α-cells of the islets as well as in enteroendocrine cells, and we confirm that GPR142 is a highly selective sensor of essential aromatic amino acids, in particular Trp and oligopeptides with N-terminal Trp. GPR142 knock-out mice displayed a very limited metabolic phenotype but demonstrated that L-Trp induced secretion of pancreatic and gut hormones is mediated through GPR142 but that the receptor is not required for protein-induced hormone secretion. A synthetic GPR142 agonist stimulated insulin and glucagon as well as GIP, CCK, and GLP-1 secretion. In particular, GIP secretion was sensitive to oral administration of the GPR142 agonist an effect which in contrast to the other hormones was blocked by protein load. Oral administration of the GPR142 agonist increased [3H]-2-deoxyglucose uptake in muscle and fat depots mediated through insulin action while it lowered liver glycogen conceivably mediated through glucagon, and, consequently, it did not lower total blood glucose. Nevertheless, acute administration of the GPR142 agonist strongly improved oral glucose tolerance in both lean and obese mice as well as Zucker fatty rat. Six weeks in-feed chronic treatment with the GPR142 agonist did not affect body weight in DIO mice, but increased energy expenditure and carbohydrate utilization, lowered basal glucose, and improved insulin sensitivity.

Conclusions: GPR142 functions as a sensor of aromatic amino acids, controlling GIP but also CCK and GLP-1 as well as insulin and glucagon in the pancreas. GPR142 agonists could have novel interesting potential in modifying metabolism through a balanced action of gut hormones as well as both insulin and glucagon.