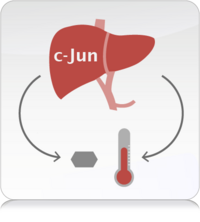 c-Jun, a prominent member of the activator protein 1 family, is involved in various physiological processes such as cell death and survival. However, the role of hepatic c-Jun in whole-body metabolism is poorly understood. Xiao, Guo, and colleagues found that hepatic c-Jun regulates glucose metabolism via fibroblast growth factor 21 and modulates body temperature through neural signaling. This study provides new insights into the crosstalk between different tissues in the regulation of whole-body metabolism and the transcriptional regulation of FGF21.

Objective: c-Jun, a prominent member of the activator protein 1 (AP-1) family, is involved in various physiology processes such as cell death and survival. However, a role of hepatic c-Jun in the whole-body metabolism is poorly understood.

Methods: We generated liver-specific c-Jun knock-out (c-jun△li) mice to investigate the effect of hepatic c-Jun on the whole-body physiology, particularly in blood glucose and body temperature. Primary hepatocytes were also used to explore a direct regulation of c-Jun in gluconeogenesis.

Conclusions: These data demonstrate a novel function of hepatic c-Jun in the regulation of gluconeogenesis and body temperature via FGF21 and neural signals. Our results also provide novel insights into the organ crosstalk in the regulation of the whole-body physiology.