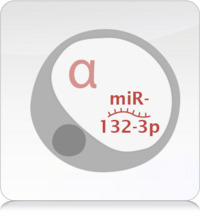 miRNAs are small non-coding RNAs that regulate the expression of target genes by inhibiting translation or by inducing mRNA degradation. Several studies have illustrated the importance of miRNAs in glucose homeostasis. Dusaulcy et al. hypothesized that miRNAs are involved in alpha-cell molecular and functional alterations or adaptations in type 2 diabetes. They identified 16 miRNAs in alpha-cells and 28 in beta-cells differentially regulated according to diet. The most highly differentially regulated miRNA in alpha-cells from hyperglycemic mice, miR-132-3p, was found to be involved in alpha-cell proliferation and survival.

Objective: Diabetes is a complex disease implicating several organs and cell types. Within the islets, dysregulation occurs in both alpha- and beta-cells, leading to defects of insulin secretion and increased glucagon secretion. Dysregulation of alpha-cells is associated with transcriptome changes. We hypothesized that microRNAs (miRNAs) which are negative regulators of mRNA stability and translation could be involved in alpha-cell alterations or adaptations during type 2 diabetes.

Methods: miRNA microarray analyses were performed on pure alpha- and beta-cells from high-fat diet fed obese hyperglycemic mice and low-fat diet fed controls. Then, the most regulated miRNA was overexpressed or inhibited in primary culture of mouse and human alpha-cells to determine its molecular and functional impact.

Results: 16 miRNAs were significantly regulated in alpha-cells of obese hyperglycemic mice and 28 in beta-cells. miR-132-3p had the strongest regulation level in alpha-cells, where it was downregulated, while we observed an opposite upregulation in beta-cells. In vitro experiments showed that miR-132-3p, which is inversely regulated by somatostatin and cAMP, is a positive modulator of alpha-cell proliferation and implicated in their resistance to apoptosis. These effects are associated with the regulation of a series of genes, including proliferation and stress markers Mki67 and Bbc3 in mouse and human alpha-cells, potentially involved in miR-132-3p functions.