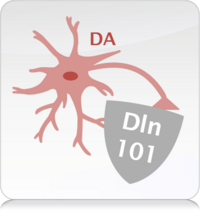 Parkinson’s Disease (PD) is a neurodegenerative disease that appears when levels of dopamine (DA) in the substantia nigra (SN) display a 70-80% reduction. The etiology of PD is still elusive. Dln101 is a potential neuroprotective compound that targets the growth hormone secretagogue 1 receptor (GHSR). Stutz et al. evaluated Dln101 in comparison with ghrelin and investigated its GHSR-mediated effects that increase SN DA resilience. Although Dln101-mediated neuroprotection of SN DA cells was equivalent to that of ghrelin, its effect on electrical activity was very distinct despite the requirement of GHSR in mediating effects of both molecules.

Objective: Dopamine neurons in the Substantia nigra (SN) play crucial roles in control of voluntary movement. Extensive degeneration of this neuronal population is the cause of Parkinson's disease (PD). Many factors have been linked to SN DA neuronal survival, including neuronal pacemaker activity (responsible for maintaining basal firing and DA tone) and mitochondrial function. Dln-101, a naturally occurring splice variant of the human ghrelin gene, targets the ghrelin receptor (GHSR) present in the SN DA cells. Ghrelin activation of GHSR has been shown to protect SN DA neurons against 1-methyl-4-phenyl-1,2,5,6 tetrahydropyridine (MPTP) treatment. We decided to compare the actions of Dln-101 with ghrelin and identify the mechanisms associated with neuronal survival.

Results: Here, we report that the human isoform displays an equivalent neuroprotective factor. However, while exogenous administration of mouse ghrelin electrically activates SN DA neurons increasing dopamine output, as well as locomotion, the human isoform significantly suppressed dopamine output, with an associated decrease in animal motor behavior. Investigating the mechanisms by which GHSR mediates neuroprotection, we found that dopamine cell-selective control of electrical activity is neither sufficient nor necessary to promote SN DA neuron survival, including that associated with GHSR activation. We found that Dln101 pre-treatment diminished MPTP-induced mitochondrial aberrations in SN DA neurons and that the effect of Dln101 to protect dopamine cells was dependent on mitofusin 2, a protein involved in the process of mitochondrial fusion and tethering of the mitochondria to the endoplasmic reticulum.

Conclusions: Taken together, these observations unmasked a complex role of GHSR in dopamine neuronal protection independent on electric activity of these cells and revealed a crucial role for mitochondrial dynamics in some aspects of this process.