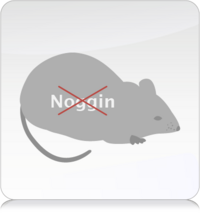 Noggin is an extracellular inhibitor of bone morphogenetic proteins (BMPs), growth factors that regulate development and tissue differentiation through their influences on cell proliferation, lineage and migration. Blázquez-Medela and colleagues investigated whether Noggin has the ability to modulate adipose tissue and obesity. They deleted the Noggin gene in mouse adipocytes in vivo and found that Noggin deficiency promotes age-related whitening of brown adipose tissue and white adipose hypertrophy associated with obesity.

Objective: Obesity has increased to pandemic levels and enhanced understanding of adipose regulation is required for new treatment strategies. Although bone morphogenetic proteins (BMPs) influence adipogenesis, the effect of BMP antagonists such as Noggin is largely unknown. The aim of the study was to define the role of Noggin, an extracellular BMP inhibitor, in adipogenesis.

Results: Our studies showed that Noggin is expressed in progenitor cells but declines in adipocytes, possibly allowing for lipid accumulation. Correspondingly, adipocyte-specific Noggin deletion in vivo promoted age-related obesity in both genders with no change in food intake. Although the loss of Noggin caused white adipose tissue hypertrophy, and whitening and impaired function in brown adipose tissue in both genders, there were clear gender differences with the females being most affected. The females had suppressed expression of brown adipose markers and thermogenic genes including peroxisome proliferator activated receptor gamma coactivator 1 alpha (PGC1alpha) and uncoupling protein 1 (UCP1) as well as genes associated with adipogenesis and lipid metabolism. The males, on the other hand, had early changes in a few BAT markers and thermogenic genes, but the main changes were in the genes associated with adipogenesis and lipid metabolism. Further characterization revealed that both genders had reductions in VO2, VCO2, and RER, whereas females also had reduced heat production. Noggin was also reduced in diet-induced obesity in inbred mice consistent with the obesity phenotype of the Noggin-deficient mice.