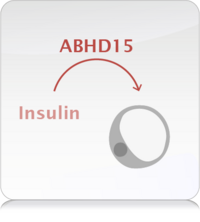 Insulin suppresses lipolysis in adipocytes. However, the mechanism for this is not well understood. ABHD15 displays several properties implicating it as having an important role in lipolysis. It is a member of the α/β-hydrolase family of proteins that includes several other lipolytic regulatory proteins. Stöckli, Zadoorian, et al. show that insulin-stimulated suppression of lipolysis is blocked in the absence of ABHD15 in adipocytes. ABHD15 knockout mice displayed elevated circulating free fatty acids upon fasting and in response to insulin. Furthermore, ABHD15 knockout mice showed increased liver triglycerides upon β-adrenergic receptor activation.

Objective: Insulin suppresses adipose tissue lipolysis after a meal, playing a key role in metabolic homeostasis. This is mediated via the kinase Akt and its substrate phosphodiesterase 3B (PDE3B). Once phosphorylated and activated, PDE3B hydrolyses cAMP leading to the inactivation of cAMP-dependent protein kinase (PKA) and suppression of lipolysis. However, several gaps have emerged in this model. Here we investigated the role of the PDE3B-interacting protein, α/β-hydrolase ABHD15 in this process.

Methods: Lipolysis, glucose uptake, and signaling were assessed in ABHD15 knock down and knock out adipocytes and fat explants in response to insulin and/or β-adrenergic receptor agonist. Glucose and fatty acid metabolism were determined in wild type and ABHD15−/− littermate mice.

Results: Deletion of ABHD15 in adipocytes resulted in a significant defect in insulin-mediated suppression of lipolysis with no effect on insulin-mediated glucose uptake. ABHD15 played a role in suppressing PKA signaling as phosphorylation of the PKA substrate Perilipin-1 remained elevated in response to insulin upon ABHD15 deletion. ABHD15−/− mice had normal glucose metabolism but defective fatty acid metabolism: plasma fatty acids were elevated upon fasting and in response to insulin, and this was accompanied by elevated liver triglycerides upon β-adrenergic receptor activation. This is likely due to hyperactive lipolysis as evident by the larger triglyceride depletion in brown adipose tissue in these mice. Finally, ABHD15 protein levels were reduced in adipocytes from mice fed a Western diet, further implicating this protein in metabolic homeostasis.