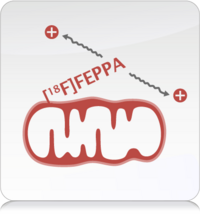 Chemical stimulation with β3-adrenergic receptor agonists has been shown to induce browning in white adipose tissue (WAT), but determination of the quantity and location of this new beige fat mass is a challenge. The difference in mitochondrial abundance between WAT and beige fat suggests that an imaging agent able to quantify mitochondrial expression may be ideal for identifying beige fat mass. TSPO-18kDa (TSPO) is a five transmembrane domain protein located on the outer membrane of mitochondria, which may be detected using positron emission tomography (PET). Hartimath et al. tested the TSPO tracer [18F]FEPPAand found that it may be useful for detecting unstimulated beige adipocytes.

Objective: The browning of white adipose tissue (WAT) into beige has been proposed as a strategy to enhance energy expenditure to combat the growing epidemic of obesity. Research into browning strategies are hampered by the lack of sensitive, translatable, imaging tools capable of detecting beige fat mass non-invasively. [18F]FDG is able to detect activated beige fat but provides little information on unstimulated beige fat mass. We have assessed the use of [18F]FEPPA, a tracer for the TSPO-18KDa found on the outer mitochondrial membrane, as an alternative imaging agent capable of detecting unstimulated brown fat (BAT) and beige fat.

Results: Repeated dosing with β3-adrenergic agonist CL-316,243 caused a significant increase in [18F]FDG uptake in both interscapular BAT and inguinal WAT associated with the increased metabolic activity of brown and beige adipocytes respectively. [18F]FEPPA uptake was likewise increased in inguinal WAT but showed no increase in BAT uptake due to stimulation over the same time course. Furthermore, inguinal WAT uptake was unaffected by pharmacological blockade, indicating that [18F]FEPPA uptake is associated with the expression of mitochondria in BAT and beige adipocytes and independent of activation.

Conclusions: These data show that [18F]FEPPA can detect BAT and newly formed beige fat under non-stimulated, thermoneutral conditions and that uptake after stimulation is linked to mitochondrial expression as opposed to activation.