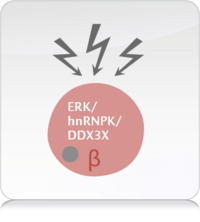 Type 2 diabetes develops because of the dysfunction and eventual loss of pancreatic β cells. An important class of factors that regulate gene expression programs is RNA binding proteins (RBPs), which may be involved in splicing, translation, and RNA stability. Good and colleagues studied the RBP hnRNPK. By focusing on the post-transcriptional regulation of the mRNA encoding JUND, a transcription factor with links to β cell redox homeostasis and apoptosis, they have elucidated a novel ERK/hnRNPK/DDX3X axis that is activated in islets during metabolic stress.

Objective: Pancreatic β cell failure plays a central role in the development of type 2 diabetes (T2D). While the transcription factors shaping the β cell gene expression program have received much attention, the post-transcriptional controls that are activated in β cells during stress are largely unknown. We recently identified JUND as a pro-oxidant transcription factor that is post-transcriptionally upregulated in β cells during metabolic stress. Here we seek to uncover the mechanisms underlying this maladaptive response to metabolic stress.

Results: A de novo motif analysis was performed on a subset of genes previously found to be regulated at the level of ribosome binding during PDX1-deficiency, which identified a poly-cytosine (polyC) motif in the 3′UTR of the transcript encoding JUND. The polyC-binding protein hnRNPK bound to the mRNA encoding JUND, leading us to hypothesize that hnRNPK regulates JUND expression during glucolipotoxicity. Indeed, loss of hnRNPK blocked the post-transcriptional upregulation of JUND during metabolic stress. hnRNPK was phosphorylated in mouse and human islets during glucolipotoxicity and in islets of diabetic db/db mice. The MEK/ERK signaling pathway was both necessary and sufficient for the phosphorylation of hnRNPK, upregulation of JUND levels, and induction of pro-oxidant and pro-inflammatory genes. Further, we identified the RNA helicase DDX3X as a new binding partner for hnRNPK that is required for efficient translation of JUND mRNA. Loss of hnRNPK reduced DDX3X binding to translation machinery, suggesting that these factors cooperate to regulate translation in β cells.

Conclusions: Our results identify a novel ERK/hnRNPK/DDX3X pathway that influences β cell survival and is activated under conditions associated with T2D.