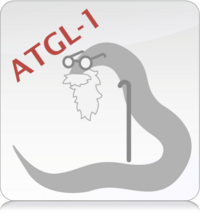 Animal lifespan is increased by fasting and a reduction of insulin/IGF signaling (IIS), an effect that is conserved from nematodes to humans. Two major "signaling nodes", Forkhead box O1 (FoxO1)- and Target Of Rapamycin Complex 1 (TORC1)-centered, are responsible for the effect of nutrients and IIS on the lifespan. Zaarur et al. recently found that FoxO1 and mTORC1 control the rates of lipolysis in mammalian cells by regulating expression of adipose triglyceride lipase (ATGL). Here, they use the nematode C. elegans to show that ATGL is the common mediator of the fasting and IIS longevity effects.

Objective: Animal lifespan is controlled through genetic pathways that are conserved from nematodes to humans. Lifespan-promoting conditions in nematodes include fasting and a reduction of insulin/IGF signaling. Here we aimed to investigate the input of the Caenorhabditis elegans homologue of the mammalian rate-limiting lipolytic enzyme Adipose Triglyceride Lipase, ATGL-1, in longevity control.

Methods: We used a combination of genetic and biochemical approaches to determine the role of ATGL-1 in accumulation of triglycerides and regulation of longevity.

Results: We found that expression of ATGL is increased in the insulin receptor homologue mutant daf-2 in a FoxO/DAF-16-dependent manner. ATGL-1 is also up-regulated by fasting and in the eat-2 loss-of-function mutant strain. Overexpression of ATGL-1 increases basal and maximal oxygen consumption rate and extends lifespan in C. elegans. Reduction of ATGL-1 function suppresses longevity of the long-lived mutants eat-2 and daf-2.

Conclusions: Our results demonstrate that ATGL is required for extended lifespan downstream of both dietary restriction and reduced insulin/IGF signaling.