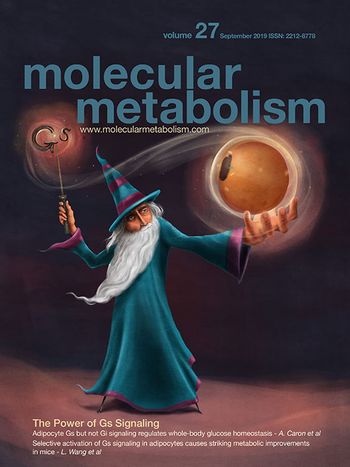 Because of their pleiotropic effects on energy and glucose homeostasis, G protein coupled receptors (GPCRs) expressed in white adipose tissue (WAT) and brown adipose tissue (BAT) are considered potential targets for the treatment of metabolic diseases. There are four main families of G proteins: Gi/Go, Gq, Gs, and G12. In rodents, most of the positive effects of the sympathetic nervous system on adipose tissue are attributed to norepinephrine activation of Gs-coupled beta 3 adrenergic receptors located at the surface of the adipocytes.

The groups of Caron et al. as well as Wang et al. did similar experiments to further elucidate the role of Gs signaling in adipocytes: they used Designer Receptors Exclusively Activated by Designer Drugs (DREADDs), chemogenetically-engineered proteins that allow spatial and temporal control of G protein signaling in vivo because they can only be activated by an exogenously administered drug. Both groups report that Gs signaling in adipocytes is a potent regulator of systemic glucose homeostasis, improving glucose tolerance and insulin sensitivity.