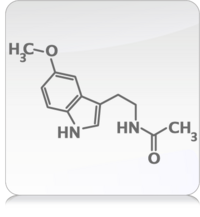 Melatonin from the pineal gland is best known for its regulation of the circadian rhythm. However, melatonin synthesis also occurs in other organs, one of which is the thymus. Melatonin synthesis changes with age. To assess whether the thymic melatoninergic system shows changes related to development, Cruz-Chamorro et al. studied the enzyme expression required for melatonin synthesis as well as the nuclear and membrane melatonin receptors in normal human thymuses from children of different ages. They found that the thymic melatoninergic system is present and especially active from the first days of human life and its expression is inversely correlated with the age of the human thymus.

Objective: To obtain greater knowledge of the extra-pineal sources of melatonin during development, the amount of indolamine and the expression levels of the last two enzymes involved in its biosynthesis, Arylalkylamine N-acetyltransferase (AANAT) and acetylserotonin O-methyltransferase (ASMT), were analyzed in the human thymus from children from three different age groups (from days to years). The melatonin membrane and nuclear receptor expression levels also were studied.

Methods: Quantitative reverse transcriptase PCR and western blot were performed to investigate the receptor and enzyme expression levels. The results were examined and correlated with the ages of the thymuses.

Results: We found high levels of indolamine in the thymuses of newborns (younger than 1 month), which decreased during development; thymuses from the months (from 2 to 11 months) and years (from 1 to 12 years) groups showed lower levels. A similar decline was also observed in the mRNA of the AANAT enzyme and the expression levels of melatonin receptors. However, ASMT expression was exactly the opposite, with low levels in the newborn group and higher levels in the years group. Our results show that the thymic synthesis of melatonin occurs very early in childhood. Additionally, this is the first report that is focused on melatonin receptors expression in the human thymus.

Conclusions: Considering the limited melatonin synthesis performed by the newborn pineal gland, we suggest that the high levels of melatonin found in human thymus in this experimental group arise from synthesis in the tissue itself, which could be contributing to the immune efficiency at the thymic level.