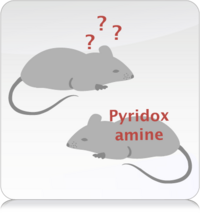 It is increasingly evident that people with diabetes have a higher risk of developing Alzheimer’s disease or other central nervous system disorders related to cognitive decline. Pyridoxamine is one of the three interconvertible members of vitamin B6, an essential cofactor in several processes including synthesis of neurotransmitters. Protective effects of pyridoxamine from several secondary complications of diabetes have previously been described. Kassab et al. demonstrate that robust recognition memory deficits in diabetic rats are correlated with dysfunction in brain metabolism. Pyridoxamine treatment prevented these recognition memory deficits.

Objective: The impact of diabetes mellitus on the central nervous system is less widely studied than in the peripheral nervous system, but there is increasing evidence that it elevates the risk of developing cognitive deficits. The aim of this study was to characterize the impact of experimental diabetes on the proteome and metabolome of the hippocampus. We tested the hypothesis that the vitamin B6 isoform pyridoxamine is protective against functional and molecular changes in diabetes.

Conclusions: Our data indicate a protective effect of pyridoxamine against diabetes-induced cognitive deficits, and our comprehensive ‘omics datasets provide insight into the pathogenesis of cognitive dysfunction enabling development of further mechanistic and therapeutic studies.