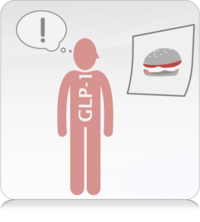 Weight reduction by lifestyle interventions is possible, but often followed by weight regain. Maurer and colleagues sought to determine predictors of successful maintenance of weight loss. They analyzed the interaction of dorsolateral prefrontal cortex (DLPFC) activity after presentation of food cues and the response of GLP-1 after oral glucose intake in individuals taking part in a weight loss-weight maintenance intervention study over 27 months. The interaction of GLP-1 and DLPFC activity was a predictor for successful body weight regulation. Biomarkers for body weight regulation may be improved by considering neuronal and hormonal processes together since their interaction might be superordinate to each phenotype alone.

Objective: This study evaluated the impact of the interaction between the anorexigenic incretin hormone glucagon-like peptide-1 (GLP-1) and reward-related brain activity in the dorsolateral prefrontal cortex (DLPFC), a key area of behavioral control, on future weight loss in obese individuals.

Methods: We performed a weight loss-weight maintenance intervention study over 27 months. We applied an fMRI food-cue reactivity paradigm during which the participants were passively exposed to food pictures to evaluate neuronal activity in the DLPFC. Additionally, we measured concentrations of circulating GLP-1 levels during a standard oral glucose tolerance test. Phenotyping was performed consecutively before and after a 3-month low-calorie diet as well as after a randomized 12-month trial, investigating the effect of a combined behavioral intervention on body weight maintenance. Participants were then followed-up for another 12 months without further intervention.

Conclusions: Our data demonstrate an interaction between a peripheral hormonal signal and central nervous activity as robust predictor of body weight change throughout the different periods of a long-term life-style intervention. The preeminent role of their interdependency compared to the partly ambivalent effects of the single components argues for integrative approaches to improve sensitivity and reliability of weight prediction conventionally based on individual biomarkers.