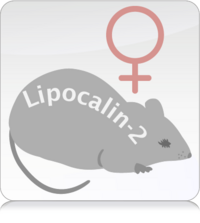 Lipocalin-2 (LCN2) is a secreted glycoprotein that has been implicated in several cardio-metabolic disease states including obesity, inflammation and insulin resistance, alcoholic and non-alcoholic fatty liver disease, cardiac hypertrophy, heart failure, and atherosclerosis. However, most studies of LCN2 were only conducted in male mice. Krishnan and colleagues examined gene-by-sex interactions and demonstrate that adipose-secreted, and not liver-secreted, LCN2 is causal in developing diet-induced metabolic complications, but only in females.

Objective: Lipocalin-2 (LCN2) is a secreted protein involved in innate immunity and has also been associated with several cardiometabolic traits in both mouse and human studies. However, the causal relationship of LCN2 to these traits is unclear, and most studies have examined only males.

Results: We studied the genetics of LCN2 expression and associated clinical traits in both males and females in a panel of 100 inbred strains of mice (HMDP). The natural variation in Lcn2 expression across the HMDP exhibits high heritability, and genetic mapping suggests that it is regulated in part by Lipin1 gene variation. The correlation analyses revealed striking tissue dependent sex differences in obesity, insulin resistance, hepatic steatosis, and dyslipidemia. To understand the causal relationships, we examined the effects of expression of LCN2 selectively in liver or adipose. On a Lcn2-null background, LCN2 expression in white adipose promoted metabolic disturbances in females but not males. It acted in an autocrine/paracrine manner, resulting in mitochondrial dysfunction and an upregulation of inflammatory and fibrotic genes. On the other hand, on a null background, expression of LCN2 in liver had no discernible impact on the traits examined despite increasing the levels of circulating LCN2 more than adipose LCN2 expression. The mechanisms underlying the sex-specific action of LCN2 are unclear, but our results indicate that adipose LCN2 negatively regulates its receptor, LRP2 (or megalin), and its repressor, ERα, in a female-specific manner and that the effects of LCN2 on metabolic traits are mediated in part by LRP2.

Conclusions: Following up on our population-based studies, we demonstrate that LCN2 acts in a highly sex- and tissue-specific manner in mice. Our results have important implications for human studies, emphasizing the importance of sex and the tissue source of LCN2.