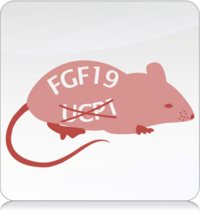 The endocrine hormone fibroblast growth factor 19 (FGF19) has emerged as a potential target for the treatment of obesity and its associated comorbidities. The therapeutic benefits associated with FGF19 administration have also been proposed to be linked to the recruitment of uncoupling protein 1 (UCP1) and other key thermogenic pathways in white and brown adipose tissue. However, Antonellis and colleagues show that while chronic FGF19 administration reduced body weight, it did not increase energy expenditure in UCP1KO mice. This suggests that the anti-obesity action of FGF19 may be driven by its classical role in the regulation of hepatic bile acid synthesis rather than the upregulation of thermogenic pathways in adipose tissue.

Objective: Fibroblast growth factor 19 (FGF19) is a postprandial hormone which plays diverse roles in the regulation of bile acid, glucose, and lipid metabolism. Administration of FGF19 to obese/diabetic mice lowers body weight, improves insulin sensitivity, and enhances glycemic control. The primary target organ of FGF19 is the liver, where it regulates bile acid homeostasis in response to nutrient absorption. In contrast, the broader pharmacologic actions of FGF19 are proposed to be driven, in part, by the recruitment of the thermogenic protein uncoupling protein 1 (UCP1) in white and brown adipose tissue. However, the precise contribution of UCP1-dependent thermogenesis to the therapeutic actions of FGF19 has not been critically evaluated.

Methods: Using WT and germline UCP1 knockout mice, the primary objective of the current investigation was to determine the in vivo pharmacology of FGF19, focusing on its thermogenic and anti-obesity activity.

Results: We report that FGF19 induced mRNA expression of UCP1 in adipose tissue and show that this effect is required for FGF19 to increase caloric expenditure. However, we demonstrate that neither UCP1 induction nor an elevation in caloric expenditure are necessary for FGF19 to induce weight loss in obese mice. In contrast, the anti-obesity action of FGF19 appeared to be associated with its known physiological role. In mice treated with FGF19, there was a significant reduction in the mRNA expression of genes associated with hepatic bile acid synthesis enzymes, lowered levels of hepatic bile acid species, and a significant increase in fecal energy content, all indicative of reduced lipid absorption in animals treated with FGF19.

Conclusions: Taken together, we report that the anti-obesity effect of FGF19 occurs in the absence of UCP1. Our data suggest that the primary way in which exogenous FGF19 lowers body weight in mice may be through the inhibition of bile acid synthesis and subsequently a reduction of dietary lipid absorption.