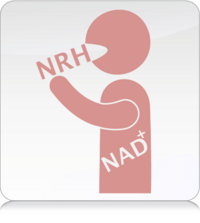 Nicotinamide adenine dinucleotide (NAD+) plays critical roles in energy metabolism as an electron transferring agent. Nicotinamide riboside (NR) is an NAD+ precursor that can be used as a dietary supplement, but it has several drawbacks. Giroud-Gerbetant, Joffraud, et al. identified NRH, a reduced form of NR, as a new NAD+ precursor. NRH shows an unprecedented ability to increase NAD+ in cultured cells and mice, as it is more potent and faster than NR. Despite the minor chemical modification, NRH utilizes a different path than NR to synthesize NAD+. The authors also demonstrate that NRH is protected against degradation in the plasma and can be detected in circulation after oral administration. Finally, NRH also demonstrates therapeutic efficacy against cisplatin-induced kidney injury.

Objective: A decay in intracellular NAD+ levels is one of the hallmarks of physiological decline in normal tissue functions. Accordingly, dietary supplementation with NAD+ precursors can prevent, alleviate, or even reverse multiple metabolic complications and age-related disorders in diverse model organisms. Within the constellation of NAD+ precursors, nicotinamide riboside (NR) has gained attention due to its potent NAD+ biosynthetic effects in vivo while lacking adverse clinical effects. Nevertheless, NR is not stable in circulation, and its utilization is rate-limited by the expression of nicotinamide riboside kinases (NRKs). Therefore, there is a strong interest in identifying new effective NAD+ precursors that can overcome these limitations.

Methods: Through a combination of metabolomics and pharmacological approaches, we describe how NRH, a reduced form of NR, serves as a potent NAD+ precursor in mammalian cells and mice.

Results: NRH acts as a more potent and faster NAD+ precursor than NR in mammalian cells and tissues. Despite the minor structural difference, we found that NRH uses different steps and enzymes to synthesize NAD+, thus revealing a new NRK1-independent pathway for NAD+ synthesis. Finally, we provide evidence that NRH is orally bioavailable in mice and prevents cisplatin-induced acute kidney injury.

Conclusions: Our data identify a new pathway for NAD+ synthesis and classify NRH as a promising new therapeutic strategy to enhance NAD+ levels.