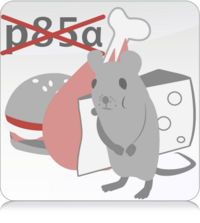 The protein p85α is a regulatory subunit of phosphoinositide 3-kinases (PI3Ks). Some class I PI3K isoforms are involved in different levels of metabolic control as well as in systemic dysfunctions associated with obesity. The lack of p85α induces an increased insulin sensitivity in mice. Gomez-Hernandez and colleagues generated a mouse model lacking p85α in brown adipose tissue (BAT). Their data strongly suggest that under a high-fat diet, the loss of p85α in BAT improves thermogenic functionality and induces obesity resistance by increased insulin sensitivity and a nonfatty liver.

Objective: An increase in mass and/or brown adipose tissue (BAT) functionality leads to an increase in energy expenditure, which may be beneficial for the prevention and treatment of obesity. Moreover, distinct class I PI3K isoforms can participate in metabolic control as well as in systemic dysfunctions associated with obesity. In this regard, we analyzed in vivo whether the lack of p85α in BAT (BATp85αKO) could modulate the activity and insulin signaling of this tissue, thereby improving diet-induced obesity and its associated metabolic complications.

Methods: We generated BATp85αKO mice using Cre-LoxP technology, specifically deleting p85α in a conditional manner. To characterize this new mouse model, we used mice of 6 and 12 months of age. In addition, BATp85αKO mice were submitted to a high-fat diet (HFD) to challenge BAT functionality.

Results: Our results suggest that the loss of p85α in BAT improves its thermogenic functionality, high-fat diet–induced adiposity and body weight, insulin resistance, and liver steatosis. The potential mechanisms involved in the improvement of obesity include (1) increased insulin signaling and lower activation of JNK in BAT, (2) enhanced insulin receptor isoform B (IRB) expression and association with IRS-1 in BAT, (3) lower production of proinflammatory cytokines by the adipose organ, (4) increased iWAT browning, and (5) improved liver steatosis.

Conclusions: Our results provide new mechanisms involved in the resistance to obesity development, supporting the hypothesis that the gain of BAT activity induced by the lack of p85α has a direct impact on the prevention of diet-induced obesity and its associated metabolic complications.