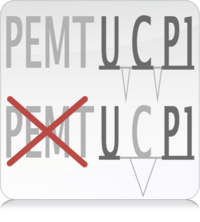 Mitochondrial thermogenesis in brown adipose tissue (BAT) is largely driven by uncoupling protein 1 (UCP1). Phosphatidylethanolamine methyltransferase (PEMT) is an enzyme that generates phosphatidylcholine. Mice with a whole-body deletion of PEMT become cold-intolerant when fed a high-fat diet. Johnson and colleagues report that PEMT plays a vital role in thermogenesis by regulating UCP1 protein expression via alternative splicing. Surprisingly, PEMT within BAT does not mediate this effect, nor does it substantially affect BAT function. Rather, PEMT’s action occurs in a non-cell-autonomous manner.

Objective: Phosphatidylethanolamine methyltransferase (PEMT) generates phosphatidylcholine (PC), the most abundant phospholipid in the mitochondria and an important acyl chain donor for cardiolipin (CL) biosynthesis. Mice lacking PEMT (PEMTKO) are cold-intolerant when fed a high-fat diet (HFD) due to unclear mechanisms. The purpose of this study was to determine whether PEMT-derived phospholipids are important for the function of uncoupling protein 1 (UCP1) and thus for maintenance of core temperature.

Methods: To test whether PEMT-derived phospholipids are important for UCP1 function, we examined cold-tolerance and brown adipose (BAT) mitochondria from PEMTKO mice with or without HFD feeding. We complemented these studies with experiments on mice lacking functional CL due to tafazzin knockdown (TAZKD). We generated several conditional mouse models to study the tissue-specific roles of PEMT, including mice with BAT-specific knockout of PEMT (PEMT-BKO).

Results: Chow- and HFD-fed PEMTKO mice completely lacked UCP1 protein in BAT, despite a lack of difference in mRNA levels, and the mice were accordingly cold-intolerant. While HFD-fed PEMTKO mice exhibited reduced mitochondrial CL content, this was not observed in chow-fed PEMTKO mice or TAZKD mice, indicating that the lack of UCP1 was not attributable to CL deficiency. Surprisingly, the PEMT-BKO mice exhibited normal UCP1 protein levels. Knockout of PEMT in the adipose tissue (PEMT-AKO), liver (PEMT-LKO), or skeletal muscle (PEMT-MKO) also did not affect UCP1 protein levels, suggesting that lack of PEMT in other non-UCP1-expressing cells communicates to BAT to suppress UCP1. Instead, we identified an untranslated UCP1 splice variant that was triggered during the perinatal period in the PEMTKO mice.

Conclusions: PEMT is required for UCP1 splicing that yields functional protein. This effect is derived by PEMT in nonadipocytes that communicates to BAT during embryonic development. Future research will focus on identifying the non-cell-autonomous PEMT-dependent mechanism of UCP1 splicing.