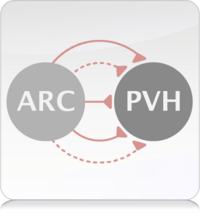 Results: We found that 1) the density and strength of ARCAgRP/NPY fibers increase in the PVH of fasted mice, 2) the morphological remodeling of the ARCAgRP/NPY→PVH projections correlates with the activation of PVH neurons, and 3) PVH neurons are not activated in ARC-ablated mice. We also found that fasting-induced remodeling of ARCAgRP/NPY→PVH fibers and PVH activation are impaired in mice with pharmacological or genetic blockage of GHSR signaling.

Conclusions: This evidence shows that the connectivity between hypothalamic circuits controlling food intake can be remodeled in the adult brain, depending on the energy balance conditions, and that GHSR activity is a key regulator of this phenomenon.