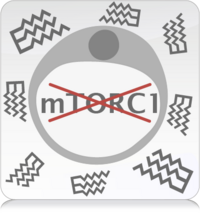 The mechanistic target of rapamycin (mTOR) is a serine/threonine protein kinase that nucleates two structurally and functionally distinct complexes, mTORC1 and mTORC2. The available data do not identify a clear or consistent role for adipocyte mTORC1 signaling in systemic lipid homeostasis. Paolella et al. demonstrate that mTORC1 signaling in adipose tissue is critical for the maintenance of plasma lipid homeostasis in the fed state. Lack of mTORC1 in adipocytes increases both lipolysis and circulating triglycerides in fed mice.

Objective: Pharmacological agents targeting the mTOR complexes are used clinically as immunosuppressants and anticancer agents and can extend the lifespan of model organisms. An undesirable side effect of these drugs is hyperlipidemia. Although multiple roles have been described for mTOR complex 1 (mTORC1) in lipid metabolism, the etiology of hyperlipidemia remains incompletely understood. The objective of this study was to determine the influence of adipocyte mTORC1 signaling in systemic lipid homeostasis in vivo.

Methods: We characterized systemic lipid metabolism in mice lacking the mTORC1 subunit Raptor (RaptoraKO), the key lipolytic enzyme ATGL (ATGLaKO), or both (ATGL-RaptoraKO) in their adipocytes.

Conclusions: Unsuppressed adipose lipolysis in the fed state interferes with triglyceride clearance and contributes to hyperlipidemia. Adipose tissue mTORC1 activity is necessary for appropriate suppression of lipolysis and for the maintenance of systemic lipid homeostasis.