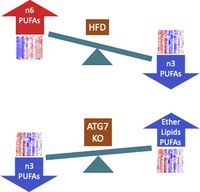 Investigations of autophagy in β-cells have usually focused on its homeostatic function. More dynamic roles in inhibiting glucose-stimulated insulin secretion (GSIS), potentially involving remodelling of cellular lipids, have been suggested from in vitro studies but not evaluated in vivo.

β-cell function was impaired by inhibiting autophagy in the longer-term, but conversely improved by 3-week deletion of Atg7, specifically under HFD conditions. This was accompanied by augmented GSIS ex vivo. Surprisingly, the HFD had minimal effect on sphingolipid and neutral lipid species, but modulated >100 phospholipids and ether lipids, and markedly shifted the profile of polyunsaturated fatty acid (PUFA) sidechains from n3 to n6 forms. These changes were partially countered by Atg7 deletion, consistent with an accompanying upregulation of the PUFA elongase enzyme, Elovl5. Loss of Atg7 separately augmented plasmalogens and alkyl lipids, in association with increased expression of Lonp2, a peroxisomal chaperone/protease that facilitates maturation of ether lipid synthetic enzymes. Depletion of PUFAs and ether lipids was also observed in MIN6 cells chronically exposed to oleate (more so than palmitate). GSIS was inhibited by knocking down Dhrs7b, which encodes an enzyme of peroxisomal ether lipid synthesis. Conversely, impaired GSIS due to oleate pre-treatment was selectively reverted by Dhrs7b overexpression.

A detrimental increase in n6:n3 PUFA ratios in ether lipids and phospholipids is revealed as a major response of β-cells to high-fat feeding. This is partially reversed by short-term inhibition of autophagy, which results in compensatory changes in peroxisomal lipid metabolism. The short-term phenotype is linked to improved GSIS, in contrast to the impairment seen with the longer-term inhibition of autophagy. The balance between these positive and negative inputs could help determine whether β-cells adapt or fail in response to obesity.