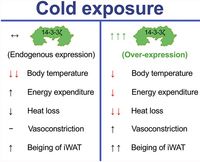 Adaptive thermogenesis, which is partly mediated by sympathetic input on brown adipose tissue (BAT), is a mechanism of heat production that confers protection against prolonged cold exposure. Various endogenous stimuli, for example, norepinephrine and FGF-21, can also promote the conversion of inguinal white adipocytes to beige adipocytes, which may represent a secondary cell type that contributes to adaptive thermogenesis. We previously identified an essential role of the molecular scaffold 14-3-3ζ in adipogenesis, but one of the earliest, identified functions of 14-3-3ζ is its regulatory effects on the activity of tyrosine hydroxylase, the rate-limiting enzyme in the synthesis of norepinephrine. Herein, we examined whether 14-3-3ζ could influence adaptive thermogenesis via actions on BAT activation or the beiging of white adipocytes.

Transgenic mice over-expressing a TAP-tagged human 14-3-3ζ molecule or heterozygous mice without one allele of Ywhaz, the gene encoding 14-3-3ζ, were used to explore the contribution of 14-3-3ζ to acute (3 h) and prolonged (3 days) cold (4 °C) exposure. Metabolic caging experiments, PET-CT imaging, and laser Doppler imaging were used to determine the effect of 14-3-3ζ over-expression on thermogenic and vasoconstrictive mechanisms in response to cold.

Transgenic over-expression of 14-3-3ζ (TAP) in male mice significantly improved tolerance to acute and prolonged cold. In response to cold, body temperatures in TAP mice did not decrease to the same extent when compared to wildtype (WT) mice, and this was associated with increased UCP1 expression in beige inguinal white tissue (iWAT) and BAT. Of note was the paradoxical finding that cold-induced changes in body temperatures of TAP mice were associated with significantly decreased energy expenditure. The marked improvements in tolerance to prolonged cold were not due to changes in sensitivity to β-adrenergic stimulation or BAT or iWAT oxidative metabolism; instead, over-expression of 14-3-3ζ significantly decreased thermal conductance and heat loss in mice via increased peripheral vasoconstriction.

Despite being associated with elevations in cold-induced UCP1 expression in brown or beige adipocytes, these findings suggest that 14-3-3ζ regulates an alternative, non-thermogenic mechanism via vasoconstriction to minimize heat loss during cold exposure.