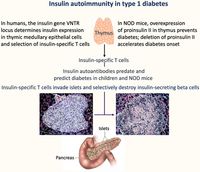 Since its discovery 100 years ago, insulin, as the ‘cure’ for type 1 diabetes, has rescued the lives of countless individuals. As the century unfolded and the autoimmune nature of type 1 diabetes was recognised, a darker side of insulin emerged. Autoimmunity to insulin was found to be an early marker of risk for type 1 diabetes in young children. In humans, it remains unclear if autoimmunity to insulin is primarily due to a defect in the beta cell itself or to dysregulated immune activation. Conversely, it may be secondary to beta-cell damage from an environmental agent (e.g., virus). Nevertheless, direct, interventional studies in non-obese diabetic (NOD) mouse models of type 1 diabetes point to a critical role for (pro)insulin as a primary autoantigen that drives beta cell pathology.

Modelled on Koch's postulates for the pathogenicity of an infectious agent, evidence for a pathogenic role of (pro)insulin as an autoantigen in type 1 diabetes, particularly applicable to the NOD mouse model, is reviewed. Evidence in humans remains circumstantial. Additionally, as (pro)insulin is a target of autoimmunity in type 1 diabetes, its application as a therapeutic tool to elicit antigen-specific immune tolerance is assessed.

Paradoxically, insulin is both a ‘cure’ and a potential ‘cause’ of type 1 diabetes, actively participating as an autoantigen to drive autoimmune destruction of beta cells - the instrument of its own destruction.