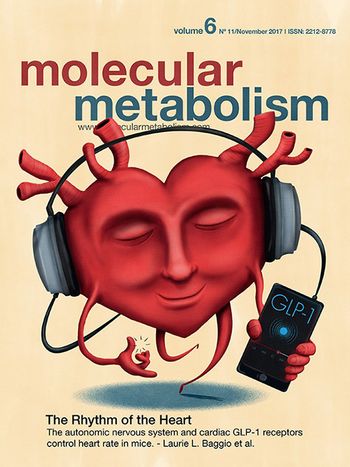 Although control of blood glucose remains a primary goal in the treatment of type 2 diabetes (T2D), substantial effort is also directed toward reducing the development of diabetes-associated vascular complications, for example by reducing blood pressure. Glucagon-like peptide-1 (GLP-1) is a gut hormone with pleiotropic effects that, among other actions, also controls heart rate (HR). The data available so far suggest that GLP-1 may control HR indirectly, through modulation of autonomic nervous system activity, as well as directly, through control of pacemaker activity via the atrial GLP-1 receptor (GLP-1R). To elucidate the relative importance of and inter-dependence of these pathways, Baggio, Ussher et al. have now studied the regulation of HR in control and Glp1rCM-/- mice treated with the GLP-1R agonists lixisenatide or liraglutide. The importance of the autonomic nervous system was examined in mice co-administered propranolol or atropine. Their findings reveal temporally distinct contributions from both the sympathetic nervous system and cardiac GLP-1Rs in the HR response to GLP-1R agonism in mice in vivo. In contrast, the isolated perfused mouse heart or dissected atrial preparations did not exhibit a direct chronotropic response to GLP-1R agonists ex vivo. Hence, the atrial GLP-1R mediates a HR response to GLP-1R agonism in the context of the intact mouse heart in vivo, but is not sufficient for transduction of a heart- autonomous chronotropic response ex vivo.