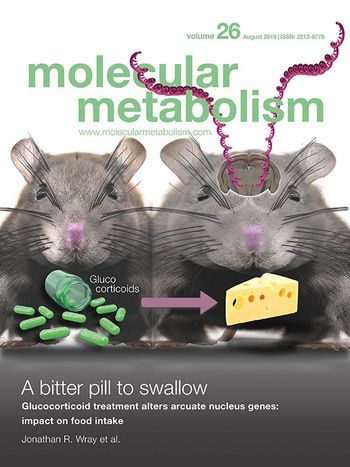 Glucocorticoids (GCs) are extensively prescribed medicines due to their potent immuno­suppressive and anti-inflammatory properties. Prolonged high-dose GC use is associated with a range of metabolic side effects, including hyperphagia, obesity, and abnormal glucose homeostasis. The mechanisms driving these adverse metabolic effects remain unclear. A potential region involved in driving these GC-induced side effects is the hypothalamic arcuate nucleus, a region that is critical for the regulation of feeding and metabolism.

Wray et al. used a global transcriptomic approach to investigate the effects of GCs in the hypothalamus. This revealed a variety of genes involved in energy regulation, of which type-II iodothyronine deiodinase (Dio2) was selected as the most promising candidate for further study. A knockdown of Dio2 attenuated the GC-induced increase in Agrp; however, knockdown conferred no protection from the observed hyperphagia or weight gain. The range of both known and novel candidate genes indicates that multiple mechanisms may contribute to the metabolic abnormalities observed with GC treatment.