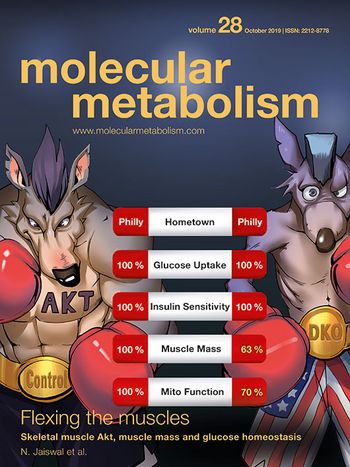 In response to a meal, insulin promotes muscle growth and leads to a robust increase in skeletal muscle glucose uptake. In insulin-resistant individuals, there is a significant reduction in insulin-stimulated glucose uptake into skeletal muscle, contributing to feeding-associated hyperglycemia. As a result, there has been considerable interest in defining the downstream signaling mechanisms responsible for coordinating insulin’s control of skeletal muscle glucose uptake. Accumulating evidence has implicated the serine/threonine kinase Akt (protein kinase B) as a central regulator of insulin action. A prevailing hypothesis in the field suggests that a reduction in insulin-stimulated Akt activation in skeletal muscle decreases glucose uptake and Glut-4 translocation leading to hyperglycemia and systemic insulin resistance.

To directly assess the role of skeletal muscle Akt on muscle growth and glucose homeostasis, Jaiswal et al. deleted Akt2 or both Akt1 and Akt2 specifically in the skeletal muscles of mice. While mice bearing an Akt2 deletion alone showed no effect on muscle growth and whole-body glucose metabolism because of the compensatory role of Akt1, congenital deletion of both the Akt isoforms resulted in a drastic reduction in muscle mass accompanied with a mild defect in glucose tolerance. Mechanistically, the authors determined that prolonged loss of Akt results in mitochondrial dysfunction and activation of AMP activated protein kinase (AMPK), which is required for insulin-stimulated glucose uptake in the absence of Akt.