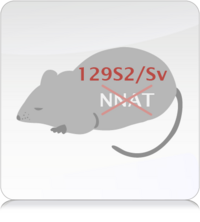 Objective: Imprinted genes are crucial for the growth and development of fetal and juvenile mammals. Altered imprinted gene dosage causes a variety of human disorders, with growth and development during these crucial early stages strongly linked with future metabolic health in adulthood. Neuronatin (Nnat) is a paternally expressed imprinted gene found in neuroendocrine systems and white adipose tissue and is regulated by the diet and leptin. Neuronatin expression is downregulated in obese children and has been associated with stochastic obesity in C57BL/6 mice. However, our recent studies of Nnat null mice on this genetic background failed to display any body weight or feeding phenotypes but revealed a defect in glucose-stimulated insulin secretion due to the ability of neuronatin to potentiate signal peptidase cleavage of preproinsulin. Nnat deficiency in beta cells therefore caused a lack of appropriate storage and secretion of mature insulin.

Methods: To further explore the potential role of Nnat in the regulation of body weight and adiposity, we studied classical imprinting-related phenotypes such as placental, fetal, and postnatal growth trajectory patterns that may impact upon subsequent adult metabolic phenotypes.

Results: Here we find that, in contrast to the lack of any body weight or feeding phenotypes on the C57BL/6J background, deletion of Nnat in mice on 129S2/Sv background causes a postnatal growth restriction with reduced adipose tissue accumulation, followed by catch up growth after weaning. This was in the absence of any effect on fetal growth or placental development. In adult 129S2/Sv mice, Nnat deletion was associated with hyperphagia, reduced energy expenditure, and partial leptin resistance. Lack of neuronatin also potentiated obesity caused by either aging or high fat diet feeding.

Conclusion: The imprinted gene Nnat plays a key role in postnatal growth, adult energy homeostasis, and the pathogenesis of obesity via catch up growth effects, but this role is dependent upon genetic background.