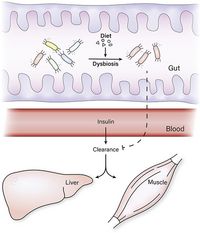 Blood glucose and insulin clearance were tested in conventional male mice treated with antibiotics and germ-free mice colonized with microbes from mice that were fed a control (chow) diet or an obesogenic high-fat diet (HFD). The composition of the fecal microbiota was analyzed using 16S rRNA sequencing.

Gut microbes regulate insulin clearance during diet-induced obesity. A small cluster of microbes or their metabolites may be targeted for mitigating defects in insulin clearance and hyperinsulinemia during the progression of obesity and type 2 diabetes.